US accuses Iran over EFP Bombs

US accuses Iran over Iraq bombs 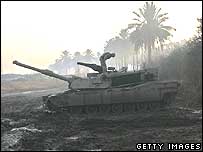 The US military has accused the “highest levels” of Iran’s government of supplying increasingly sophisticated roadside bombs to Iraqi insurgents.

Senior defense officials told reporters in Baghdad that the bombs were being used to deadly effect, killing more than 170 US troops since June 2004.

The US today came out and blamed Iran for either supplying the technology or the bombs themselves linked to the EFP devices being used against coalition forces in Iraq.

Back in June 2006 I remember reading an article on the Telegraph website about such bombs, and it was felt then that they were being supplied by the Iranians.

The precision-made mine that has ‘killed 17 British troops’

The first picture of an Iraqi insurgent mine, believed to have been responsible for the deaths of 17 British soldiers, has been obtained by The Sunday Telegraph.

The device, which has been used by insurgents throughout Iraq since May last year, fires an armour-piercing “explosively formed projectile” or EFP, also known as a shaped charge, directly into an armoured vehicle, inflicting death or terrible injuries on troops inside.

The weapon can penetrate the armour of British and American tanks and armoured personnel carriers and completely destroy armoured Land Rovers, which are used by the majority of British troops on operations in Iraq.

The device, described as an “off-route mine”, was seized by British troops in Iraq earlier this year and brought back to Britain where it underwent detailed examination by scientists at Fort Halstead, the Government’s forensic explosive laboratory in Kent.

Despite the Telegraph post going to on mention how the troops were bemoaning the lack of armoured vehicles to protect against such mines (using APC’s and not Land Rovers), they seem to forget that this type of device is probably more lethal to an APC than a Land Rover.
The projectile that is emitted from the device would cause armoured ‘backspall’ which would be far more damaging that if the projectile passed through the thin skin of a Land Rover.  The backspall would be far less in a Land Rover.
Similarly  if the APC were sealed, a pressure wave is also created within the vehicle which leads to more serious injuries.
The backspall would bounce around the interior of the armoured vehicle until its energy is expended.
A Land Rove might suffer more from the effects of the charge used to propel the projectile than it would from the projectile itself.
If these devices can take out an Abrams tank, then it really won’t matter what sort of vehicle you are in.   I’d rather be in something that it could pass through and be protected from the accompanying blast, rather than in a tin can with a lump of molten metal bouncing around shredding everything it hits.

Gerrard Caught Out by Chelsea Mascot

News from the world of Football