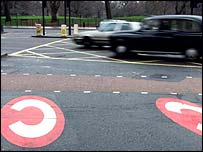 The congestion charge zone is due to be expanded on Monday

An anti-congestion charge rally is taking place in London in a last-ditch attempt to stop the western extension of the zone in two days’ time.

Organised by the West London Residents Association, the go-slow began at Addison Road, in Kensington, in west London.

I have a friend living in the Kensington area and he has a neighbour who regularly drives what would be a 5 minute walk.
London has one of the best public transport infrastructures in the UK, so why is there is a need to drive everywhere.

Anything that reduces the impact of cars in that area is a good idea.  Whilst there maybe some legitimate claims, personally I feel the benefits far out weight those.  I’m no environmentalist either so I am not arguing it for the sake of.
I’m no major fan of ‘Red Ken’ but some of the schemes implemented in the Greater London area have had a positive effect and other councils should be taking note.

There is more information at The Royal Borough of Kensington and Chelsea web site.

The Mayor of London extended the Congestion Charge into most of Kensington and Chelsea on 19 February 2007.

The Council has successfully negotiated a 90 per cent discount for all Royal Borough residents (including residents who live outside the enlarged congestion charge zone).

There is one charge for the new combined congestion charge zone.
You only have to pay the charge if you move your car between 07:00 – 18:00 during weekdays. You do not have to pay the charge simply to keep a vehicle inside the zone.
The enlarged zone covers most of the borough, west to the Earls Court One Way System, south to Chelsea Embankment and north to Harrow Road. To view the map go to TfL website

The Scheme is run by Transport for London (TfL) on behalf of the Mayor of London.

Bramley – Drama at the roadside