Why I will be at my own wake 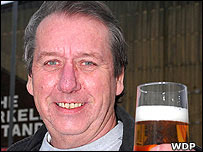 Raising a glass: “I want to say thank you”

When you are told you have just months to live what do you do? Andy Fitchett, 56, decided to organise his own wake and is hosting it.

I’m a lucky man and have had a lucky life. Many people don’t get a chance to say goodbye to people when they die but I have.

Reading this story today confirmed that there are some real people left in the UK.  In my late teens I met a woman who amazed with a similar feat of inspiration as Andy Fitchett of Swindon.

I won’t name her here, or go into too much detail, but she too had been told she had ‘n’ months to live.  The mother of 4 young daughters and left alone by her husband, rather than give up and die, she dedicated the rest of her life to doing the best not only for her daughters, but for others suffering from the same condition as her.

It has been some 25 years since I met her, but I still use the inspiration she gave me in my daily life today.  A few years after I met her, I had joined the Navy and was on a long deployment when I had heard that she had passed away.  Rather than just sadness, there was also joy because of the memories she had given myself all around her.  She would not have wanted sadness and all that knew her gained strength from her attitude towards life.
Like Andy Fitchett, she had prepared both herself, her friends and family for her final days.  Whilst there was still pain, it allowed us to celebrate her life rather than bemoan her passing.

I did work in Swindon for 5 years and went to the odd game at Swindon FC (under duress I might add). I don’t know Andy Fitchett as far as I know, but reading the article on him both on the BBC and the local  Swindon  newspaper website, he appears to have the same strength of character of my friend I knew many years ago.  I won’t be going to his wake, but I will make sure that on St Patricks Day 2007 (March 17th), I will raise a  glass in toast to him and in memory of one of the greatest women I have ever had to chance to meet.

I was a celebrity, Get Me out of here