Can The England Cricket Team End Tour On A High? 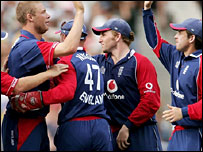 England could end their Ashes tour in Sydney on Sunday by becoming the first side for 14 years to beat Australia in a home one-day final.

At 3.15am on Sunday morning, Flintoff will lead out the England Cricket Team with a chance to gain back some credibility of what has been so far a disastrous tournament.
I’m still not sure how England managed to play their way into the finals.
Two fine consecutive innings from Paul Collingwood helped but will the rest of the team step up to the crease to make it 3 wins on the trot?

But for a poor performance by the Australians (a rare site after their previous performances), England could have been on their way home already.  But the innings played by Collingwood was probably the finest one day international innings for a long time.
McGrath was bowled out for a duck, dropped an important catch and didn’t take a single wicket. Not often you can say that about one of the worlds finest players.

Winning this one day international series won’t make up for losing the ashes, but as far as the players go, it will certainly make the long trip back home a damn site more enjoyable.

Eat at KFC? You must be pulling my crispy spicy chicken leg

Pipex/Tiscali Support Is a Joke