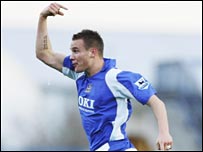 Matthew Taylor’s wonder-goal set up a comfortable win for Portsmouth against a disappointing Everton side.

Took my two boys and my father down to watch the game today.  The boys were impressed (as was I), when they saw probably what will turn out to be the goal of the season from Mathew Taylor.
We were sat behind the goal to the right in which Matty hit that 45 yard volley over the unfortunate Howard on the 16minute mark.
I knew it was a goal the minute it left his foot, just glad to say I was there to see it.  Worth the money to see the look on the boys faces.

As much as it still amazes me when I see Portsmouth 3rd in the table (ok, joint 3rd with Liverpool), they are there on merit.  I doubt that we will be there at the end of the season, unless they show the same determination as they did today in every match.
Sol Campbell is a rock at the back and it gives Primus the confidence in his game too.  If the current squad can stay fit, or if Harry gets a budget to buy some cover in January then there is a chance they will stay near the top. (Pompey in Europe ?  After last season ? More chance of me winning the lottery, but I can dream).

I think it took us 45minutes to travel down from home to Portsmouth.
On the way back, it took us 45minutes to get from the ground to the motorway such was the amount of traffic.  (There was only 19,528 fans which for Pompey isn’t bad, but the roads just can’t handle that amount).
I remember going to a Pompey – Man Utd match at Old Trafford a few years back with 50,000+ and that was no problem getting to or from the game.
Still, that was 45minutes to talk about ‘that’ goal.

The passing of a true genius and a gentleman

Changing From British Gas, without doing anything.